Leadership Advice: Why I Should Never Have Become President 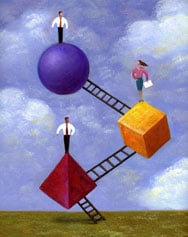 Back in the 90's, I joined a small company as a partner in the business. I was one of three. Our most senior partner and President was a natural born leader. People gravitated and got behind him no matter how difficult the circumstances - and believe me, we lived through several! His nickname became "Mr. Smooth" and he was the consummate role model of a leader under pressure. My second partner, Mr. Steady, had been there his whole career, working his way up through the ranks with his eye on the prize. I was the newcomer with industry experience, who brought fresh thinking to the table. Together, we were a pretty unbeatable combination.

When Mr. Smooth decided it was time to start stepping back, Mr. Steady became the new president. Following in his footsteps would have been a challenge for any new leader, but for Mr. Steady the contrast was far too jarring. He never lived up to the role for any of the employees, nor even for himself. He left a short time later in a downsizing round of layoffs and that's when I became the new President. I can't think of a worse way to get handed this position.

The Peter Principle plays out in organizations all the time - highly effective people who get promoted until they are beyond their level of ability. I wish I would have said "no" to the offer of President. I knew it wasn't the right position for me. I was a great number two. Task-oriented and driven, I could accomplish more in a normal work day than most people did in three. But I was lacking a very important attribute, maybe THE most important attribute, for someone at the helm - a clear future vision for the company. But the allure of the title was too enticing and there were no better options within our current staff, so I took the position... and it all slid downhill from there.

Looking back, our attempts at succession may not have killed our little company, as much as the changes going on within our industry, but it certainly helped speed things along. I didn't want to build something - I had my own dream of semi-retirement and wanted to start stepping back myself. Instead of a leader with a vision for the future, the company was stuck in my own near-sightedness. Yes, we cranked up performance and eliminated a lot of debt. But we all knew we were on a sinking ship, like rats racing to a higher deck. What could have been possible with another leader - someone who could see a different future for the company, believe in it and pull others into that shared vision?

In the book, The Zen Leader, there is a very good exercise that illustrates how attracting the future is really developing a shared vision - one that begins with you and expands to your employees. We think of time as a line going from past to present and beyond. But when we change our perspective to Now, we see all that is possible through us in the present. "Leaders who can attract great visions into the present create a new shared reality among a great many people. In organizational life, this shows up as a change in culture," states Ginny Whitelaw. If you'd like to try the timeline exercise on your own, you can get it here.

My take on this whole experience is this: execution without insight is pointless. "Attracting the future doesn't mean we forever stop using the Driver's push or the Organizer's plan; both are indispensable for getting stuff done. But they are infinitely more useful when they serve the insight and vision arising from the connected state, rather than blundering along blindly on their own," continues Ginny. Amen to that.

Our old company lawyer was a very smart man with his name on the door and a Vice President title. Even though he started the firm and added several associates over the years, he never once was its CEO. I asked him once why. "God, no," he said, "I don't want to be President!" There was a man who knew his strengths and built a thriving business never once taking over the reins. I thought it odd at the time, but I get it now.

Know who you are… know what your company needs… and don't get lured into the easy choice. That's my best advice from one who's been there:-)
END_OF_DOCUMENT_TOKEN_TO_BE_REPLACED