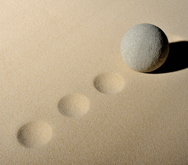 I've been on a mission the last few years to simplify my life. It actually began out of necessity a few years earlier as I combined households with a man who was a more accomplished "collector" than I was. How did we ever get all this STUFF?! So, it began… an item by item triage that put everything in a category of keep, sell, gift/donate, or throw away. Little did I know that this lesson would carry over to other aspects of my life as well.

In this country, we've all become massive collectors. It goes way beyond the laughable "the person with the most toys wins." Some economist might call it consumerism, but we don't really consume it all. Most of the time it just sits there, taking up space. When you start running out of spaces to put things, we often move into bigger spaces. In 1973, the average square footage of a new construction home in the US was 1,525. By 2010, it had grown to 2,169.

Two years ago, we downsized again into a home roughly half the size. Some things went into storage, but for the most part, we simplified again - taking only what we really needed and loved. No clutter. Pretty soon simplification spilled over into other areas of our life. Our meals became smaller and a lot healthier. It was amazing how good all this felt - like I had more breathing room. And breathe I did.

I found myself drawn to meditation and yoga. The simple act of following my breath increased my awareness of all that is going on around me. I became more aware of all the mind chatter and began to recognize the voice of ego and the fears it works so hard to protect. "By doing less, we sense more," states Ginny Whitelaw in The Zen Leader. This act of simplification is at the very heart of the "flip," from Controlling to Connecting.

In leadership, "we can experience this flip when we do less ourselves and reach out to others more," continues Ginny. "When leaders have delegated away many of their everyday tasks to attend the programs I teach, I always caution them about how much they take back when they return on Monday morning. Who can help? Who can learn from this? Where else in the organization could we get support? The more we connect with people around us and their ideas, the more we scale beyond the capacity of being merely a 'one-man-band.' Not only does connection help leadership scale to greater levels, but it's even essential for the uptake of our individual efforts…It is the flip that gets people moving with us, not because they have to, but because our connectedness brings them along."

Connectedness rewards us in many ways. In its most complete state, we experience Samadhi - where "I" disappears and we reach total absorption in the moment. Athletes call it being "in the zone." But this is not something we can will, rather it is a natural state that arises on its own. We can nurture the conditions for Samadhi through meditation and breath. If you've never tried this, here are some basic exercises from The Zen Leader that are both relaxing and rejuvenating. I encourage you to give them a try.

Simplification has taught me many things. I have learned that I don't need half the things I once thought were important to own. Letting go of material things has allowed me to more easily let go of other things, like anger and disappointment. I also worry less because I spend more time in the moment rather than role-playing future scenarios that never play out. The greater "space" in my life allows me to connect more with people and activities I enjoy. Less is more - I get it now.

I invite you to do this simple experiment. Right now, focus on where you are. Take in your whole surroundings, the smell of the air, the posture of your body and the feeling of your clothes, the things around you. Pick one thing you see. Is it important to you? If it is, appreciate its function and place in your life. Is it something you really don't need? Then do what I did and sell it, gift it, or throw it away… and enjoy the freedom that begins to develop:-)
END_OF_DOCUMENT_TOKEN_TO_BE_REPLACED

Leadership Development and the Rule of "Just Enough"

The Swedes have a great word for this: Lagom, which roughly translates as "enough, sufficient, or just right." Too often, in today's world of avid consumerism, we get caught in a "good, better, best" way of thinking and find ourselves applying that principle to all aspects of our lives, including leadership. Our tendency to overdo can lead to "leadership obesity" which manifests in many undesirable ways: the ultimate problem-solver who fails to empower their employees, or the achievement-driven leader who drives for success at all costs. "Just as we don't serve ourselves well from overeating, we do ourselves no favor by over-indulging these needs," states Ginny Whitelaw, in The Zen Leader. If you'd like a memorable visual of "leadership gorging," I invite you to watch The Zen Leader Animated.

To develop leaders using the concept of "just enough," The Zen Leader prompts us to pause and ask those questions that bring self-awareness to the situation. "When we jump in and do a task that we're comfortable with, but someone else could be doing, we might ask, Am I really the right person to do this, or am I doing this only to satisfy my own need for accomplishment? When we push ourselves too hard and edge toward burnout, we might ask, Does this situation call for this extreme response, or am I doing this because I'm only happy when I'm achieving?" The answers won't always be the same, but they will bring clarity to the source. "Pausing to face our needs at any level, and ensuring we're meeting them just enough and not to the point of greed, we make the flip from compulsively using life to serve our needs into using our needs to effectively serve life."

Changing awareness from "It's all about me" to "I'm all about it" is one of the "flips" in consciousness that The Zen Leader walks you through and is an integral part of leading by the "just enough" rule. Do you recognize the faces of "It's all about me?" Look at these statements below and see how they can be flipped around to change your perspective and how you serve the situation:

If we meet our needs at every level using "just enough," what we become are Servant Leaders, who don't get "stuck" in the vicious cycle of self-fulfillment. We have fuel and freedom to serve the whole situation, letting our strengths and true nature shine.

The Zen Leader is available through Amazon and Barnes & Noble in paperback and e-reader editions. "Like" The Zen Leader on Facebook to receive regular updates.