A Business Case for The Zen Leader

I was recently at a networking event of a small group of local business consultants.  With my fresh copy of The Zen Leader on the table, the conversation quickly turned to the topic of the book.  Most of the consultants really ‘got it’ but one of my colleagues really didn’t.  Half joking, he said, “all I know about Zen is that it’s a flavor of tea.”  After a crash course on Zen, he asked the question, “What does this have to do with business leadership?”  I’m sure he is not alone, so what better place to explore this question than our blog.

Up until Daniel Goleman popularized the concept of Emotional Intelligence, conventional wisdom told us that IQ was the primary predictor of success at a job.  Goleman discovered the error in this wisdom, showing that IQ only predicts about 25% of job performance, with the other 75% from ‘other factors’.  These other factors separate great leaders that are barely hanging on and those that go on to become leadership icons.  These other factors are precisely what The Zen Leader develops.

The field of leadership development has been evolving to better address this 75% and, the more it evolves, the more Zen is emerging.  Many business books that you have likely read have focused much more on these ‘other factors’ than on traditional management skills training.  Recall what makes up a “Level 5 Leader” in Jim Collins hit book Good To Great: a paradoxical blend of personal humility and professional will.  A very Zen approach indeed.  Martin Seligman certainly found the merit in the other factors as his work led to the field of positive psychology and research that showed a connection to business metrics such as productivity, job satisfaction, turnover and effectiveness.  And who could deny the influence of Zen on the late Steve Jobs and his simplistic ascetics and game changing in 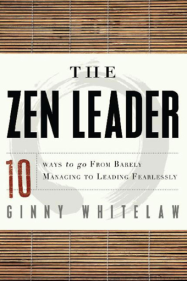 The Zen Leader represents the next step in this evolution of leadership development.  It does so by taking the leader through their own evolution of these 10 flips on their path to becoming a Zen Leader.  The concepts of Zen are perfectly positioned to help leaders effectively develop these other factors that amount to what defines them as leaders.  Not only does the literature support such an approach as an effective business leadership development strategy, author Ginny Whitelaw is not alone in illustrating the importance of Zen to business;

“Zen has long been dismissed as little more than mystical double talk by western philosophy and science.  But recent advances in the science behind creative thinking and problem solving should be changing that misconception.” – August Turak, Forbes

“Business schools are beginning to embrace a practice that has grown popular in the corporate world, teaching and studying mindfulness, the originally Buddhist approach to increasing awareness of oneself and one’s surroundings.” – Beth Gardiner, Wall Street Journal

To answer my colleagues question about what Zen has to do with business leadership…just about everything!

To learn more, join us on April 25th for a free webinar introducing The Zen Leader.